We don’t usually post political stuff.
But then, we don’t live through a tragic realignment of our world very often.

Just researched these places where we can donate to help Ukrainians.

What’s This All About?

Well, from time to time I Google, “search engines” just to see what comes up. There are quite a few. More than you might imagine.

Though it may take a while, the influence of mighty companies always wanes. It only takes one new upstart to grab the world’s attention and the market leader starts to make mistakes. Maybe this is Google’s nemesis, maybe not.

What if there were a new search engine that doesn’t harvest my on-line life for commercial gain? One that’s simple, clean, and it doesn’t tell me I’m missing out by not being logged in to my account? Just like Google used to be, in fact.

Top of my search results was an engine called DuckDuckGo.

That’s impressive too, as it proves Google really does try to give users the best results it can. DuckDuckGo is, after all, Google’s competitor, albeit a small one.

DuckDuckGo’s most obvious feature is that it doesn’t recognise you, remember you, store information about you, nor tailor search results for you. Every user making the same query gets the same results. Google delivers different search results depending on location, device you’re using, and whether you’re logged in to your Google account.

Next is the way it works. DuckDuckGo doesn’t crawl the entire worldwide web in the way other search engines do. Instead, it uses developers’ interfaces to other search engines, along with publicly available information from sites like Wikipedia. Altogether it has around 50 sources, which it filters and sorts using its own algorithms.

It’s a bit simpler than Google and it seems to work quite well.

Read all about DuckDuckGo on Wikipedia.

To compare its results with Google, I tried a couple of searches. Not a great test, but since I wanted to do these searches anyway it seemed a good idea. I used the Firefox web browser, so they were both on the same footing.

Our electric kettle at home has broken and we need a new one. The best buy in Which? is the Dualit 72400, so I searched for that. This product is available worldwide and its has a relatively long lifespan.

Here are the top four results from Google, plus some ads: 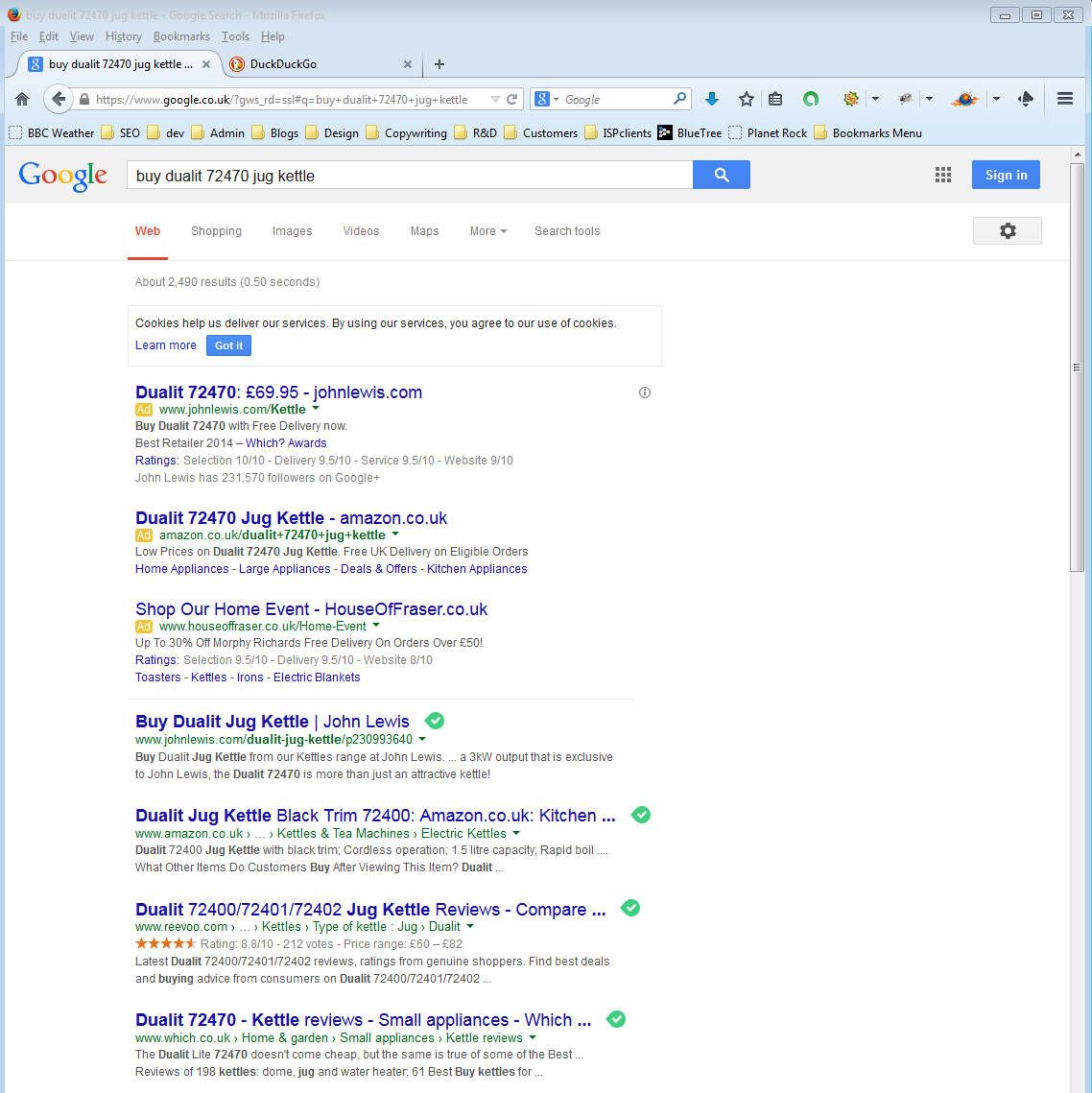 As you can see, Google displayed three ads at the top this time, then the real search results. It doesn’t display the same ads, nor even the same number, every time. I used google.co.uk, so it knows I want to buy my kettle in the UK, even though I’m not logged into my Google account. It’s just given me UK-based web pages.

Here are the DuckDuckGo results. 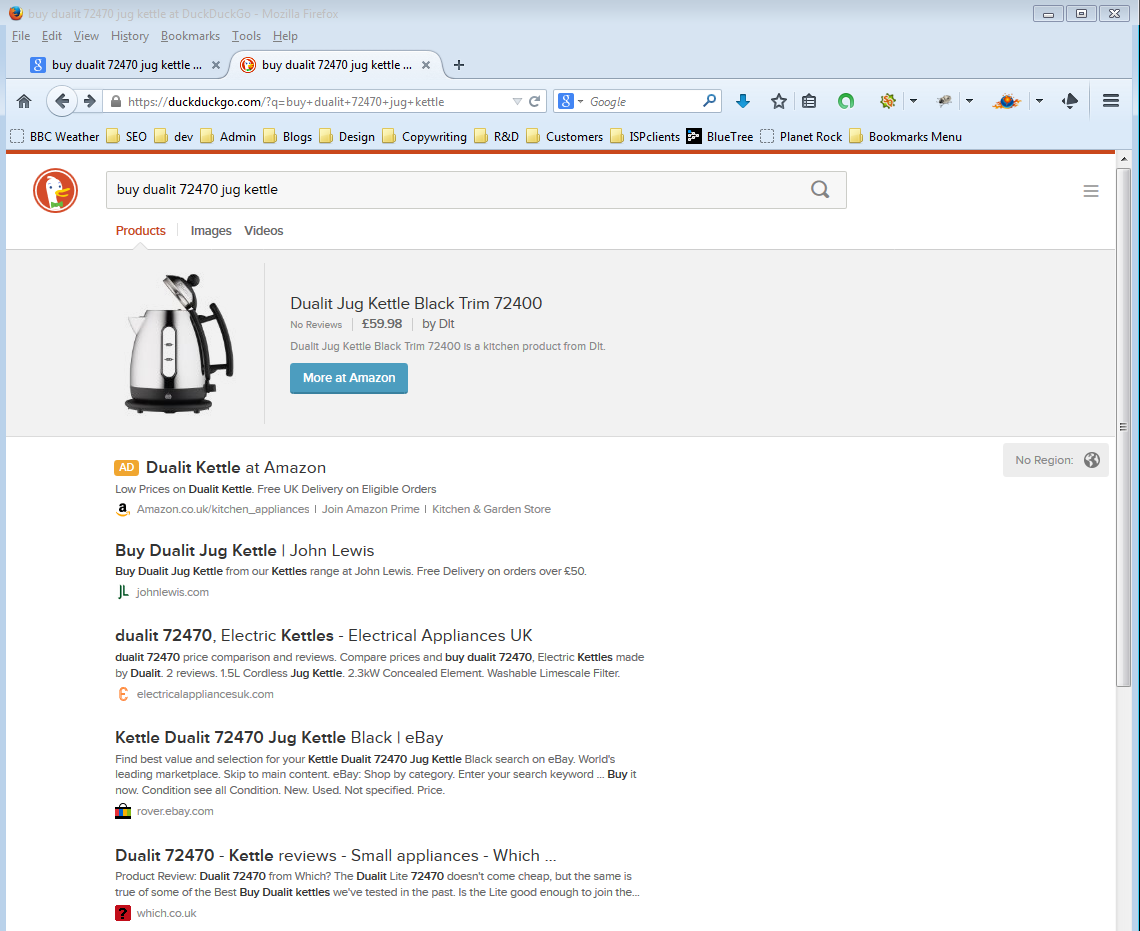 Two ads from DuckDuckGo and then the first result is the same as Google’s. Both also have the Which? website at position four. However, DuckDuckGo included some .com results, which aren’t much use to me.

Google does this quite often, too, which is irritating, and it’s easier to convince DuckDuckGo that you want to search UK sites only.

Top right on DuckDuckGo’s search results page is a region selector button. One click sets it. This takes three clicks on Google and it doesn’t always offer the option, so then you’re forced to add “UK” to your search query – too many keystrokes :-(.

How to convince Google you only want to see UK sites.
Click Search tools > Any country > Country: the UK.

They used to let you do this before searching. Can’t imagine why they changed it.

I want to buy some tickets for what promises to be a very entertaining show at the Tobacco Factory in Bristol, “Elizabeth I: Virgin on the Ridiculous”, performed by “Living Spit”. We saw another of their productions in Portishead in June and it was very funny indeed.

This seems a good test because I’m looking for something that is a) local, and b) has a short lifespan. Here are the top four results from Google. 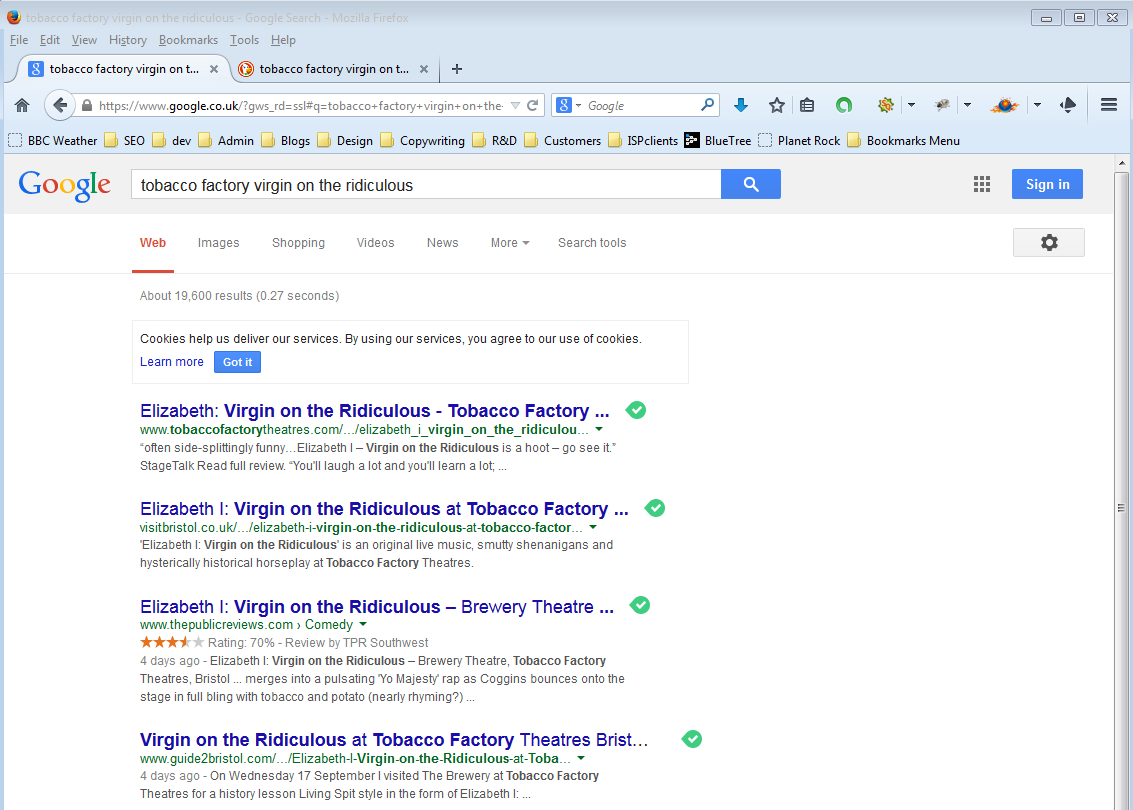 And here’s DuckDuckGo’s effort: much the same… 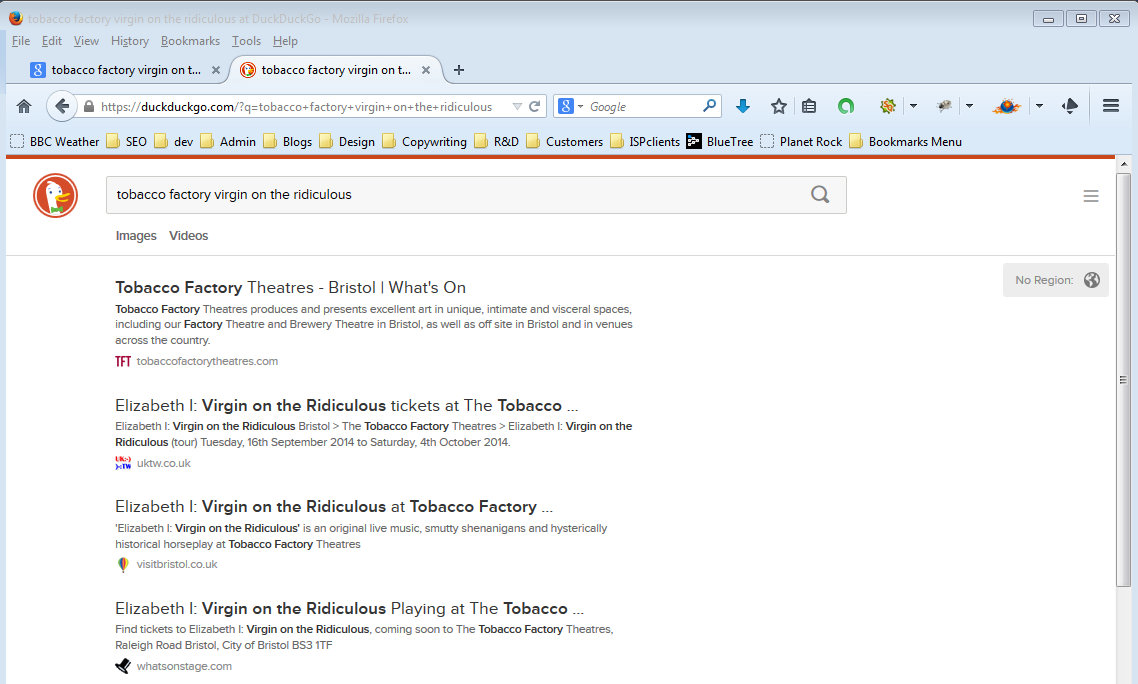 They both have the Tobacco Factory website first and one other in common: Visit Bristol. The other results from both are equally useful.

Conclusion and Next Steps

Fom this very limited test, it looks as though DuckDuckGo may be a usable search engine, despite being relatively new. Its ethos is quite different from Google’s: it’s not out to make lots of money. It’s worthy of further investigation.

I’m going to continue using Google in my Chrome browser, which is permanently logged into my Google account. This always tailors search results specifically for me: it knows my age and gender, where I live, what I search for, my favourite travel destinations, the things I buy, my circle of friends and same things about them. Think how Google can influence my search results – and the way those very results influence what I do.

Interesting! Useful too, until (if ever) that influence is misused.

I use Firefox for development and research and I’m switching to DuckDuckGo for that. And I’ll definitely use it in Avast SafeZone, when I search for websites where I’m going to enter credit card or bank details.

If you’ve tried DuckDuckGo, we’d really like to know what you think of it!